There are several different types of luminous technologies: 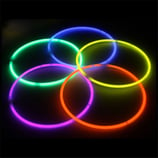 This finally brings us to the last type of luminous technology that we specialize here at LumAware: 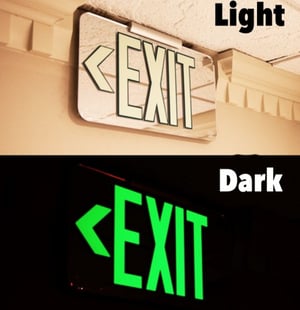 Common question: What makes LumAware different from other photoluminescent products?

As a result of this, you're able to get a much brighter glow, a faster glow, but also we're using less of that technology so we're able to pass those cost savings on to you.

Zachary Green is a 1991 graduate of Roger Bacon High School and a 1995 graduate of Bowling Green State University. A U.S. Marine Corps veteran and former lieutenant with his local fire department, Zachary is the founder and CEO of MN8 LumAware/Foxfire. MN8 is a global leader in photoluminescent safety solutions used by over 80,000 firefighters in more than 25 countries. In addition, Zachary has developed a line of safety items ranging from products that help people find their way out of dark stairwells to code approved EXIT signs that never need batteries, lightbulbs, electricity or testing. These products save over 7 million pounds of carbon dioxide emissions, 30,000 batteries and 60,000 lightbulbs per year. Zachary recently received the President of the United Sates “E” award for exporting and has been honored as Exporter of the Year by the Ohio Small Business Administration. Zachary was featured in Entrepreneur Magazine, the front page of Yahoo.com, MSN.com and in USA Today along with numerous other local and national media outlets. Zachary has testified in front of the US House of Representative Small Business committee and was named Entrepreneur of the year by Governor John Kasich. Zachary was also selected by the Obama White House as one of 10 entrepreneurs to represent the United States at the Global Entrepreneur Summit. Zachary Green has presented to hundreds of trade organizations, facilities and architectural firms, and was an expert witness for the U.S. House of Representatives Small Business Committee. As an American Institute of Architects HSW presenter, he has lectured to hundreds of architects representing dozens of architectural firms throughout the nation. A specialist in photoluminescent safety applications and the associated International Building and Fire codes, Zachary has developed the International Code Council (ICC), International Building Code (IBC) and International Fire Code (IFC) curriculum for the state Fire Marshal of South Carolina that featured egress and EXIT sign safety-approved training. Zachary has presented to various state fire and building inspectors throughout Ohio, Florida, South Carolina, Georgia and internationally. Zachary Green lives in the City of Wyoming (Cincinnati),Ohio was recently elected to the Wyoming (Ohio) City council.

LumAware is a firefighter/US Marine Corps Veteran founded company that offers more than 80 UL-listed exit signs with patented technology available in various background colors and finishes. Additionally, LumAware has a robust portfolio of code required photoluminescent solutions for stairwells and other safety signage. LumAware products are proudly Made in the USA through a partnership with the Cincinnati Association for the Blind and Visually Impaired.